The Bait and Switch  The Federal Communications Commission (“FCC”) has an admirable and often-stated goal of increasing ethnic diversity in ownership of broadcast stations and ensuring that a broad diversity of voices and viewpoints are delivered on the public airwaves.   Nexstar pretended to support this objective by partnering with Marshall Broadcasting Group (“MBG”) to … END_OF_DOCUMENT_TOKEN_TO_BE_REPLACED

Marshall Broadcasting Group, Inc. is a minority owned television broadcasting company that owns three full power television stations in the United States. The company was founded in 2014 by Pluria Marshall, Jr. All three of its television stations are affiliated with Fox and are operated through shared services agreements by the Nexstar Media Group. 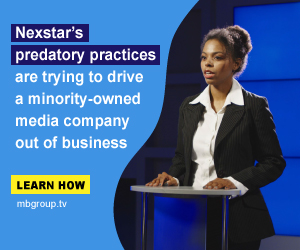